The picture is the ceiling of Leipzig’s Thomaskirche, a view gazed at distractedly by generations of bored young trebles. Me included, a couple of decades ago. I haven’t found a new loving for ecclesiastical architecture, don’t worry. I’m just spending some time this holiday, as centuries of the Thomaskirche’s faithful have, with Bach.

It’s been a day of no newspapers, no phone calls, no work, just relief. I took my four year old to the cinema for his first experience of the Big Screen. He loved it, and I loved that he loved it. We’ve eaten well together as a family, and now as I tap this I’m stretched out in paternal repose with a good novel and Bach in the sound-system.

This post is about Bach. I’m not going to launch onto my theme that it is one of the great creeping educational crimes of omission that in our relativist, dumbed-down world, schoolchildren are undiscerningly exposed to a basic twelve-bar blues, folk music song, or X-factored bland-pop offering as if those meagre scrapings are somehow musically or morally equivalent to Bach. With diminishing extra-curricular opportunities to learn to play or sing, or without the lucky lottery win of a family who can open that world, so many young people are spending their lives starved of the knowledge that there even exists one of our species’ greatest achievements, the great works of classical music. I discussed this with the great photographer David Hurn recently, who has similar views of how his musical schooling – Handel in particular – affected his whole life, but enough of the tangent. Maybe that’s another post for another day.

To the point of this evening: I came across the B Minor Mass as an undergraduate. It’s one of the great works of old Johann Sebastian. We met, as it were, on the job. The B Minor Mass is a high-wire act for horn-players, even the teenaged ones with the cool arrogance of youth and the infallible immortality that comes with it. The effort of learning and performing it was such that it took a good decade of diminishing immaturity before I appreciated that the remainder of this magnificent musical blockbuster was so was more than two heavy choral Lutheran bookends before and after the fiery obbligato of the Quoniam. Now it’s part of my better world.

Dudley Moore described Bach as orange juice for the morning soul. It is, but it’s so much more. In his great Protestant choral works, Bach is a giant affirmation, a glorious and perfect marriage of musical brilliance that we can achieve here, and something far bigger.

At the end of probably one of the more crappy years we’ve had as a small family in the competitive roster of recent anni excretises, there is no finer sentiment than this music. It’s one of the great choruses of all time, currently filling this room and my whole mind, a lovely fugue that comes together in the most musical of glorious shouts. The chorale is superb, and as we end 2014 with the world shut out for a few days, I’m all for it: 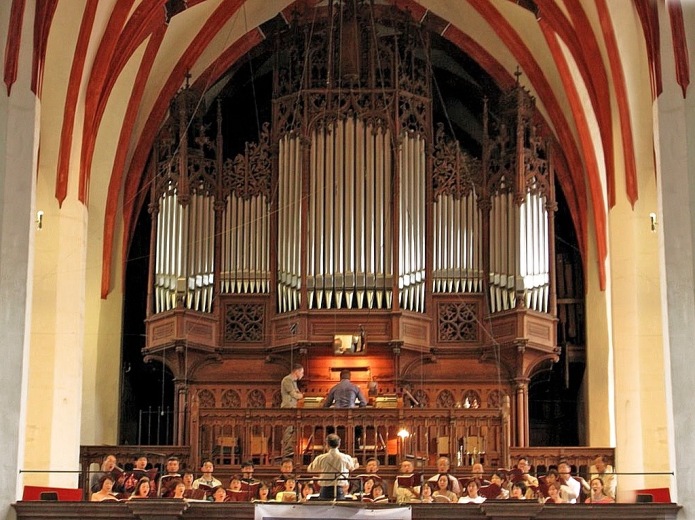