Back at the back 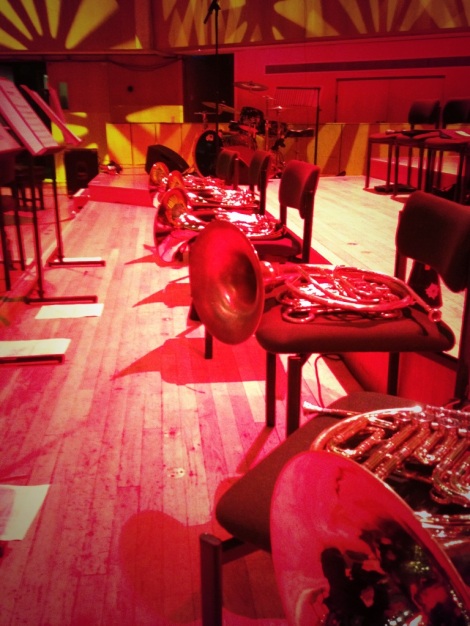 Calm before the storm

Unlike most from my political generation, I can claim a heritage underground.  But when I talk about my youthful time “down t’ pit” I mean the London Palladium.  Playing a musical instrument has good and bad moments.  Last weekend, I remembered the good bits.

When I was a kid I had posters of the London Symphony Orchestra on my wall.  I listened to Radio Three and my hi-fi was tuned for Brahms and John Williams.  The stars in my teenaged firmament were not footballers but Tim Jones, Richard Bissell, Barry Tuckwell, Michael Thompson.  They were my heroes.  Probably still are.

But I think of the kids I’ve taught in that decade and how playing an instrument has given them that elusive identity and confidence that teenaged boys in particular need in a pretty cruel and uncertain decade of their lives.  And playing the horn is a great thing for a student.  Freelancing on the weekend and in the evenings funded my beer in University, and enabled me to meet hotter girls than my status as a laughably poor sportsman or political anorak would have allowed in the normal hierarchy of life.  One of those I married ten years ago, but that’s another story.  And how else would I – and they – get to wear white tie and tails as a student without any Bullingdon-esque connotation to spoil the fact that even average blokes look great in real evening dress?

I was back in St David’s Hall on Saturday, back on the first horn chair at the high rear rostrum of a full symphony orchestra. There is no sound in the world as evocative as the A of an oboe cutting through the hubbub of an orchestra warming up, and the quiet that descends as the orchestra gets on station.  A decade had fallen away in one note and for the first time in a while I was loving it.

The Office for the day

I stopped playing the French horn to pay my bills a long time ago.  There were many reasons.  But basically there is no glamour in driving back at 2am from a concert in the sticks.  There is little enjoyment to be had on a touring show separated from your family for night after night.  Musicians with young kids really feel it, and marriages often don’t survive.  I had some months when I worked solidly and the diary was overflowing, and some months when there was nothing.  It wasn’t for me, and the simple equation always came up with the same result: I was a passable horn player but a better speechwriter, and I was already finding that I could cut it in the intense and cut-thoat world of professional politics, corporate communications and public affairs.   The other side of the coin?  Unless you are a stellar player, and then lucky among many other stellar players, you ain’t going to be doing professional music at the top of your profession. So it made more sense for politics to be the living and playing the fun.

I was “on” with a very special band. It’s an occasional orchestra of retired professionals, talented amateurs, and promising conservatoire students.   Some, like me, are people originally destined for a career in music who took a different path.  We went in the orchestral world, to borrow the words of Michael Foot, from being a rising star to an elder statesman with nothing in between.  We share a real variety of religious views, including the broadly tolerant general compass of this particular lapsed Salvationist.  We’re of all ages.  And we also like to play for the fun of it.

Jeff Howard, a supremely gifted musician, directs on the podium.  He’s utterly unfussy, competent and cool.  And he carves the air beautifully, staying perfectly in time with the horn players.  Clearly a gifted conductor.  And on a serious note his arrangements are utterly superb, a modern manifestation of that rare gift of generations of special musicians who have enlivened and enriched churches across the denominations and the centuries.  He also likes his horns loud and American-sounding, of which I of course approve highly.

The choir of several hundred owes more stylistically to Thomas Beecham than the Vicar of Dibley, and it’s all the better for it.  Proper, full throated non-conformist singing; none of the turgid Anglo-Saxon mumbling that passes for congregational singing in England’s Anglican communion.  I like my hymns from Wesley rather than Mission Praise, and in four parts, loud, and phrased.  I haven’t yet persuaded the Maestro that the next concert’s chunks of Messiah should come from the Beecham version, complete with gong, tuba, and six horns, but I’m working on it.

We’re a mixed bag.   But above all for me, it’s great to be back in a symphony orchestra.

There were some special moments.

The soloist, fresh from the west end, is a kid that Mrs G taught in one of the valleys comprehensives that punch above their socioeconomic weight and produce actors, musicians, and athletes out of all proportion to their peers.  She was fabulous, and will continue to light up stages.

We were in one of the best concert halls in the world, even if the backstage and front of house areas now show their eighties heritage (and not in a good way!).   For musicians, a real concert hall is like being a rugby player on the Arms Park turf or a footballer at Wembley: you want to be making the most of your talents in front of a full house in a place that lives and breathes it.

The Grifflet, just a fortnight shy of his third birthday, saw and heard a number of things for the first time.  His musical world has been confined to “Mammy’s Little Toot Toot Band” to wit a brass quintet, and “Daddy’s Big Toot Toot Band,” about which more later.  But he sat in the majestic commanding heights of the orchestra on my seat, and stood on the maestro’s podium for a look.  His attention was grabbed by the start of Shostakovitch’s Festive Overture,  although it was a “bit loud.”

Sitting on my left was one of my pupils.  I teach kids to play brass instruments, individually for exams and in a gloriously cacophonic brass band of 40.  The fella in the bumper’s seat is good company.  I taught him to play, but sensibly he’s making the most of all his talents and he’s now a physicist going to Imperial College. He arrived on time, turned the pages well, played the bits when I was resting in tune and in time, and didn’t p*** anyone off.  Many players in the profession would do well to follow the example!

Why write about all of this?

Playing in an orchestra is magical.  It’s a unique, special type of magic that brings together the fine tuning of amazing talents and abilities to use muscles never designed for such things in such a fragile, lucky, yet exactly synchronised collective performance.  Launching a space shuttle is easy in comparison.

I miss the good bits of playing the horn.  But Saturday brought them back.  The standard of playing is slightly higher in the profession.  But so is the level of pressure.  You see, on Saturday, we were able to enjoy ourselves.  Freed of the need to pay the mortgage, we can really go for the loud high bits and not worry about unemployment from a split note.  There was inevitably collateral damage: the singers in the choir sitting behind us had their hair swept back.   I suspect some of their hearing is yet to return.  But it was great fun. 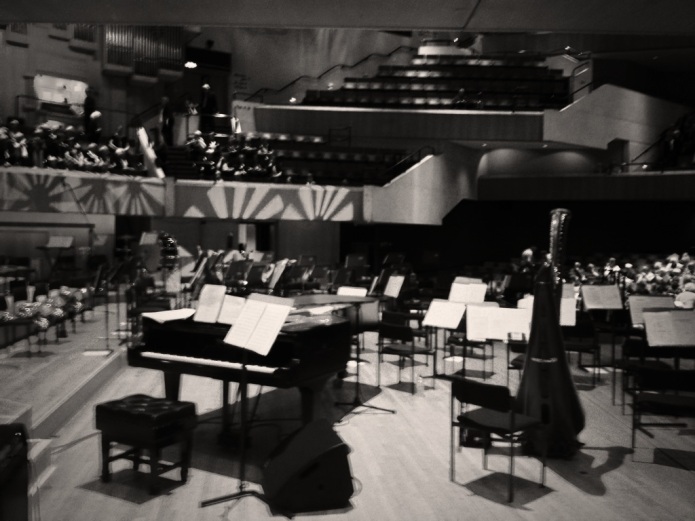