Setting out for a New World

I’m watching “Shall We Dance,” with Fred Astaire and Ginger Rogers swirling across the black-and-white Atlantic to Gershwin’s finest sounds.  Passengers of a liner, their story isn’t just lovely entertainment or great music.  It’s a glimpse of a far greater story.

Doing the newspapers on my local BBC radio station is a fun way to combine newsroom coffee with that rarest of things for a father of a young boy, an uninterrupted read of the papers.  On the last visit, filling time before a sports interview, I picked the story of three liners visiting the Port of Liverpool.  Cunard is 175 years old, and my love of its story isn’t just about Deck Quoits.

Last year Mrs Griffin spent some considerable time in Liverpool, a guest of our fabulous NHS and the amazing people at the Walton Centre NHS Trust.  A couple of days after her nine hours of neurosurgery, with her safely in the care of the high dependency nurses and under instructions to get a change of scene, I escaped the spotless hospital corridors for a couple of hours, and visited the Cunard Building.  It was a reminder of a happier time for us both.  It was also a return through the back of the wardrobe into one of the great stories of the last two centuries.  I persuaded the duty manager to let me see the departure halls, the magnificent marble and glass, mahogany panelled anteroom to The Crossing.  My enthusiasm convinced him to let me in: you see, I’m unashamedly a liner anorak.

There are two stories to the North Atlantic liners. 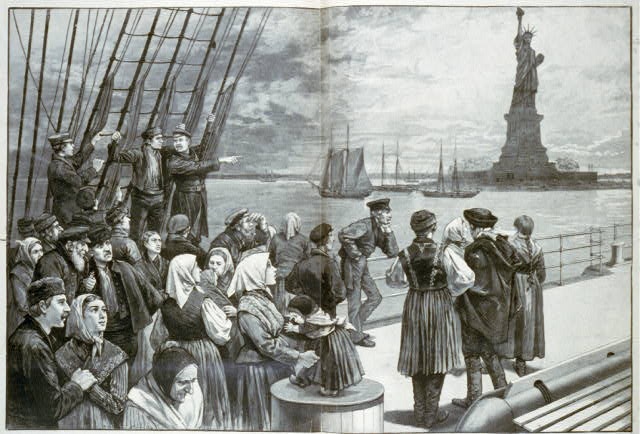 There’s the romance, luxury and class of the great Queens, with film stars and political leaders mixing with the captains of industry and jewels of society.  The Queen Mary and its French rival, the incomparably magnificent art deco Normandie, were floating palaces of the finest art of the craftsmen and designers of the jazz age.  It’s a story of glorious tailoring, of tweeds and furs, evening dress and correspondent shoes, real luggage and “Not Required On This Voyage” labels alongside your embossed initials and a railway Boat Train stamp.  But there’s another, even more compelling, story that steams alongside the glamour.

There’s the millions of people searching a better life beyond an ocean, cramped into steerage or third class, with every possession in their threadbare baggage and nothing but their hopes, fears, and determination to sustain them in the long week of the crossing.  It’s a story of human spirit and it grew the world’s greatest immigrant nation.

A crossing is different to a cruise.  It’s a race against the North Atlantic, the battle of an engineering greyhound against the white-topped salt green and grey skies.  To be done properly, and properly means at more than 20 knots, it requires a thoroughbred, a true liner.  There are few.  Liners have a deep keel, a raked bow, tremendous power and the lines to cut through the Atlantic at its most tempestuous without reducing speed.  The Clyde-built QE2 was the last for many years, until Cunard commissioned the second Queen Mary.  The slab-assembled cruise ships may well fill the tourist routes, but they’ll never be liners and anyone on one in a North Atlantic storm deserves all they get.

We did The Crossing almost a decade ago.  With leave to take in January after a Christmas on call, no great love of flying, and a burning desire to see New York, we spotted a last-minute deal to Manhattan: return flight by BA and, instantly exciting, the journey out from Southampton on the RMS Queen Elizabeth 2.  The finances added up, for both were working with no Grifflet at that point. We booked breathlessly, and drove down to Southampton with parents eager to see us off, for they’d seen QE2 launched as students.

I’ve entered the White House, the Central Lobby of the Palace of Westminster, some of the great cathedrals of Europe, but the most exciting place I have ever stepped into is the midships lobby of the QE2.  It was an amazing smell of engine oil, polish, salt air, and excitement.  They do it rather well, and there was a band, fireworks, and a great view of the night lights as we entered Southampton Water with the priority of the Royal Mail Steamer.

A Force Ten storm greeted us in the Channel, and set the scene for the next three days as solid salt water greened out our porthole and the ship cut into the swells. 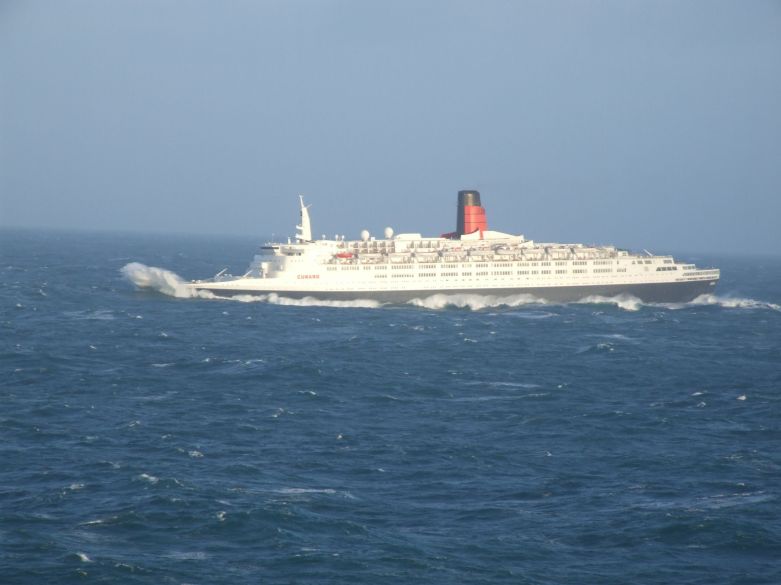 God, it was fun.  Where else, for the same price as a return flight, can you enjoy superb food and, most civilised of all, a company in evening dress who know how to have a conversation?  The couples we dined with, as the ship heaved, included a lovely but magnificently steely foreman from Clydeside’s John Brown Shipyard who’d worked on the QE2 as a fitter and union man, a crown prosecutor, a retired miner finally taking his wife away with his compensation award, and an orchestral conductor (the most I’ve ever looked at one). The ship had its own Big Band, playing brilliant music of another era.  And best of all, it had a library of real books, lovingly used and appreciated by decades of cultured passengers (there are no “guests” on a liner, a distinction I love).  With a weathered deckchair, a deep wool blanket, and a steward commanding the most fantastic reinforced hot chocolate, there is no finer place to read than the deck of a liner.

The days were marked by the midday announcement, with the officer of the watch’s announcement of “miles steamed” once the source of huge wagers.  The copper and inlay map behind the old first class bar tracked our progress.  We saw Ambrose Lightship, saw the water change off Nantucket Sound, and dined for the last night in our civvies, a tradition going back 150 years in anticipation of a dawn arrival in the New World.

When we sailed in the pre-dawn glow under the Verrezano Narrows bridge and saw the Statue of Liberty illuminated against the skyline of Manhattan, there was nothing comparable.

In a time of austerity, grim struggle and deeply unpleasant politics, the story of the liners allows us to think of a different era.  God knows, the 1930s were awful for working people like us.  It was incalculably worse for those in our communities who couldn’t work.  But the Cunard liners represent both the elegance of another era and the hope of those millions of emigrants who escaped the depressions of the Old World for a better life.  It’s a story worth retelling and, with the news as it is at the moment, worth escaping to once in a while.

I’d do it again tomorrow.